Yesterday, I was cruising around Google+ and I happened onto a story about sous-vide cooking. Sous-vide means “under vacuum” in French and is essentially a way to slow-cook using a water bath.  Slow-cooking has always intrigued me, mostly because I love BBQ, but my last DIY experiment (Alton Brown style terra-cotta smoker) was a disaster.

I decided to try sous-vide out

After a few quick searches and blog posts I decided to give the beer cooler method a shot.  After a quick Wal-Mart and Tops trip I had the appropriate tools and meat.  I scooped up a cooler for $9 and a probe-style digital thermometer, which I should have had in the kitchen anyhow. 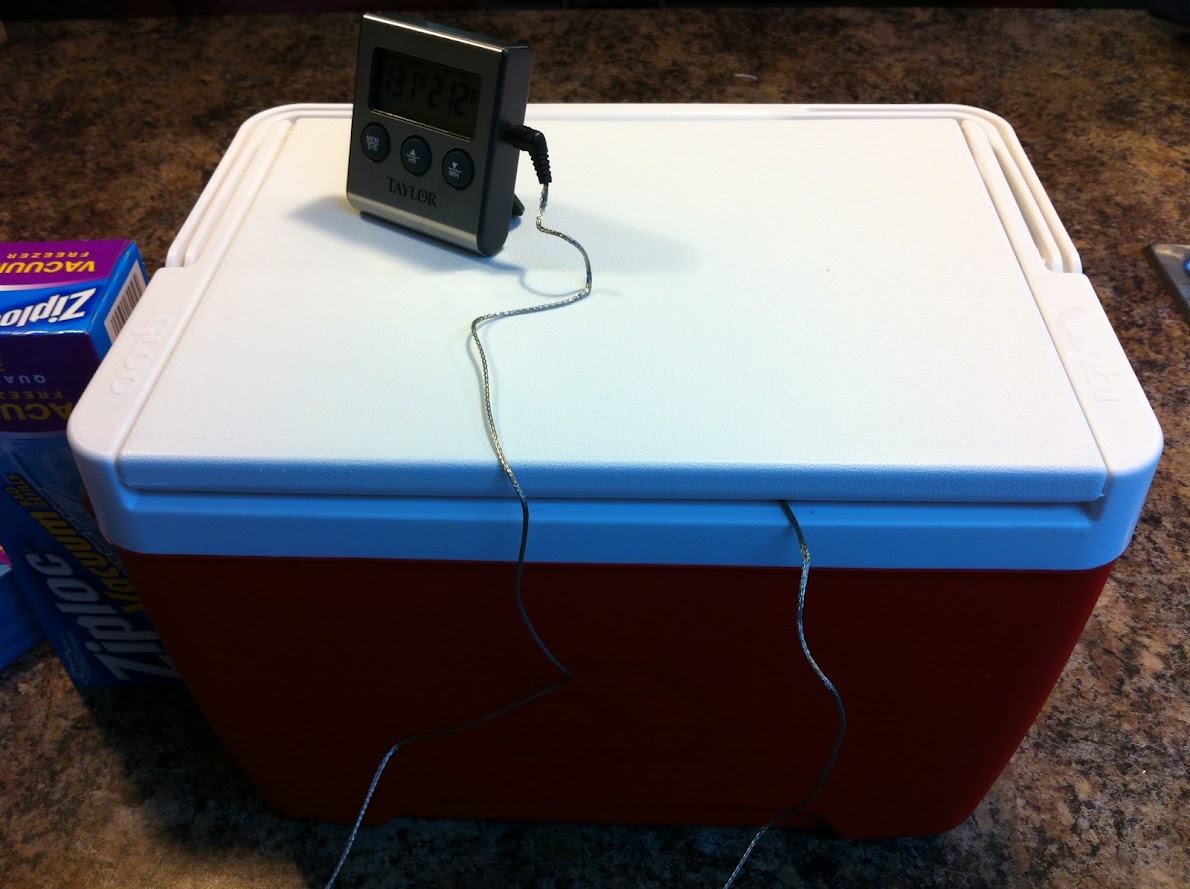 I was going to use the “slowly dip into water” method for vacuum sealing the steak into the plastic bag, but I happened upon a new gadget from Ziplock that is made for inexpensive vacuum sealing, so I thought I’d give it a shot.

Once I had the equipment all ready to go I vacuumed my steak into the bag with a little canola oil, salt, pepper, and Montreal seasoning.  I then turned my attention to heating the water; as it turns out, my sink produces hot water at about 120-degrees, so I filled up a 6-quart pot and turned up the heat on my burner until I got an even 140-degrees.  While the water bath was coming up to temp I “pre-heated” the cooler by filling it with hot tap water.

Once the water was up to temp I dumped the pre-heat water and poured the cooking water into the cooler and let it cool slightly, down to 136, and then I added the steak. Surprisingly the cooler really held the heat pretty well, after 1.5 hours it was only down to 133, not bad for a $9 cooler.

After I took the steak out I threw it on my trusty cast-iron grill pan with a heated grill press for about 90 seconds of high-heat searing.  this brought in the grill marks that I love and made sure that the meat was finished at a solid temp.

After a too-quick rest, because I was impatient, I had a perfectly cooked mid-rare steak at 134-degrees. Because no juices were lost in the process and the seasoning got to sit, without burning, on the meat for an extended period of time the taste profile was distinctively beef with hints of the seasoning. It was the best steak I have made cooking inside; grills just do a different tango.  I used an inexpensive cut this time for testing, I’m very excited about using a prime cut next time.

The coolest thing about this process is that its super repeatable and its not as time sensitive as high-heat methods; which is awesome because when I cook for others I almost never get the timing of the entree and side quite right.

For a small investment in reusable items (cooler, thermometer, plastic bags) you’ll be amazed at what you can accomplish.  Of course, if you have a big clan to feed, there’s always this 16 gallon behemoth to satisfy your slow-cooking lust.